How Disney made America’s most famous haunted house 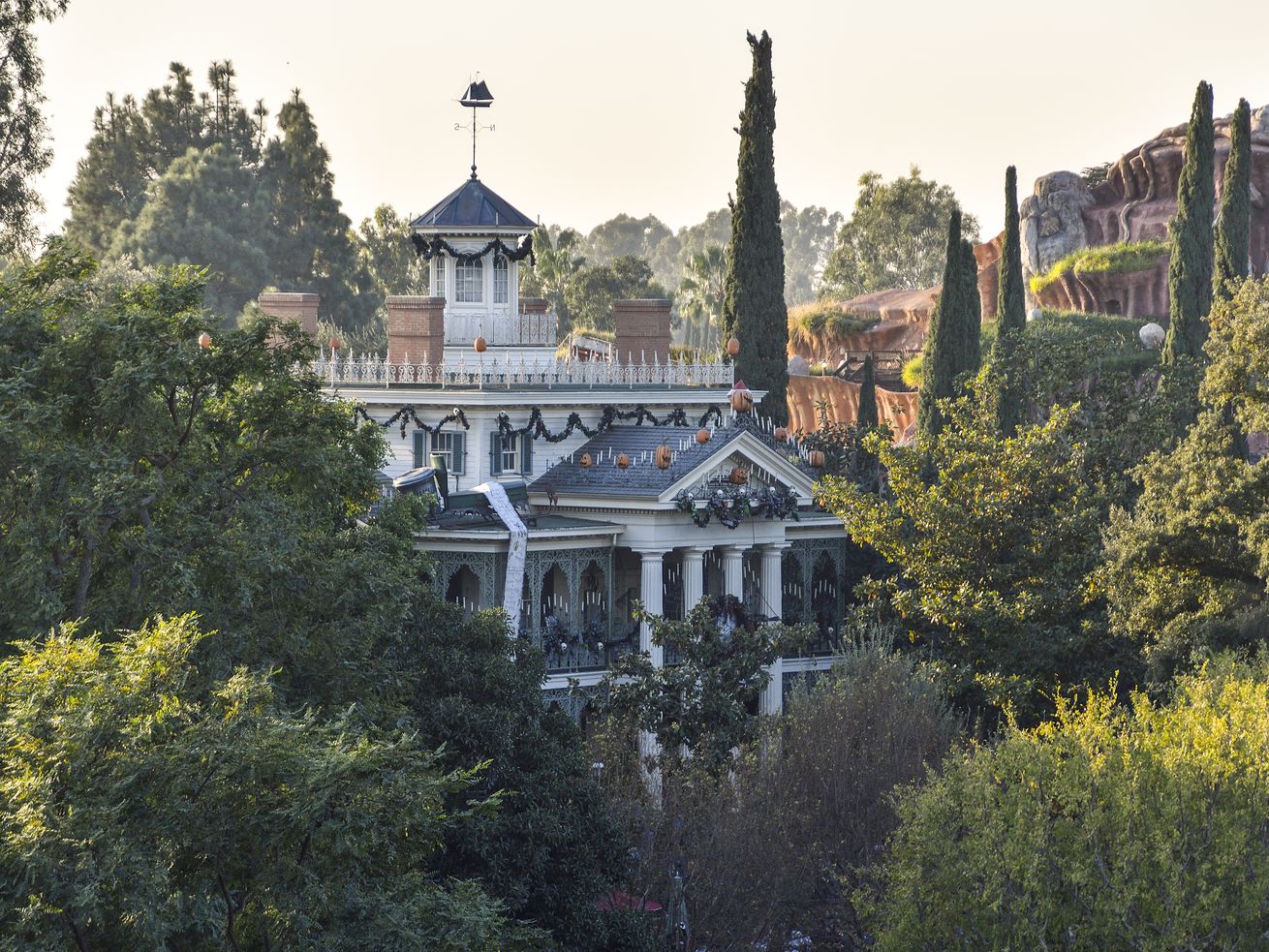 The Haunted Mansion was never supposed to be a ride.

The iconic Disneyland attraction, which turns 50 today, was first conceived as a walkthrough tour—somewhere between a carnival’s house of horror and a visit to San Jose’s spectacular Winchester Mystery House. Its development took nearly 20 years, and plans for the project changed constantly as designers fought over what park visitors might find within the walls of the neoclassical estate.

The mansion didn’t open its doors to visitors until three years after Walt Disney’s death. But the finished product successfully merged then-cutting-edge technology with elegant smoke and mirrors techniques from a bygone era—paving the way for the modern haunted house.

A preliminary haunted house sketch was included in plans for Disneyland as early as 1951, when Walt Disney still envisioned his theme park as an extension of the company’s Burbank headquarters.

But by 1955, when the park actually opened 40 miles south in Anaheim, plans for the spooky attraction had been set aside as Disney’s designers struggled to complete a far more ambitious project than the modest 16-acre campus originally proposed.

Disney’s “imagineers” returned to the project in 1957, and a prospectus for the attraction drawn up that year shows a spooky-looking antebellum manor, fronted by a cemetery.

But Walt Disney, who worked harder than nearly anyone to sell Americans on a rosy vision of the nation’s valiant history and exhilarating future, didn’t want a dilapidated remnant of the Old South in his shiny new theme park.

At Walt’s insistence, an immaculately maintained manor house—inspired by a now-demolished early 19th century residence in Baltimore—was erected in 1963, amid construction on what would become New Orleans Square. A cryptic sign in front notified guests that “post-lifetime leases” were available for deserving ghosts.

For the next six years, the mansion was simply one of Disneyland’s many curiosities. Park visitors could only walk by and marvel at the home’s impressive columns and cast-iron grillwork.

In the meantime, ride designers bickered about what to put in the park’s haunted house, and whether it should actually be scary.

By 1965, when Disney himself previewed the attraction in a television appearance, longtime Disney animator Marc Davis had already drafted prototypes of the recognizable stretching portraits that greet riders before boarding and set the tone for the attraction’s macabre, but ultimately silly spirit.

(The ride’s spookier potential can still be glimpsed in the somber, empty backgrounds designed by Claude Coats.)

When Disney died in 1966, the mansion was still being planned as a walkthrough experience. As imagineer Rolly Crump recalled in a 2005 interview, visitors would be escorted through its rooms by a “ghost host” who would provide a backstory for the house’s mysterious hauntings.

This format would allow for meticulously timed illusions, impossible to pull off with guests moving through the attraction on a track. Crump and fellow designer Yale Gracey devised a series of clever apparitions to enthrall guests throughout the experience. Most of these relied on an old trick used by magicians and hoaxers of the Victorian era.

Called Pepper’s Ghost, the illusion is carried out through careful positioning of glass sheets and light sources. The effect would have allowed costumed performers to pop up amongst guests, appearing as ethereal spirits.

But after Disney’s death, as Crump tells it, the company became more concerned with accommodating the growing throngs of people flocking to its theme park than enthralling them with uncanny magic tricks.

In 1967, Disneyland unveiled a new Tomorrowland ride called Adventure Thru Inner Space. The imaginative attraction, which ended in a bizarre sales pitch for sponsor Monsanto (then manufacturing the Agent Orange used to devastating effect in the Vietnam War), was the first ride to make use of a brand new conveyance system, dubbed the Omnimover.

The mechanism carried guests around in small, partially enclosed vehicles affixed to a circular track. Based on transportation technology developed for the 1964 World’s Fair, the Omnimover—like a ski lift—could run continuously without stopping. Because the cars were attached to the track, it was impossible for individual vehicles to break down. 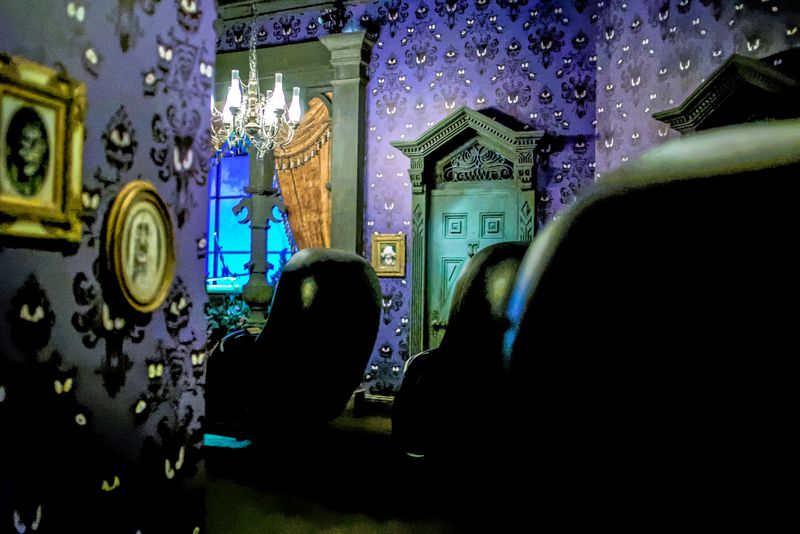 Chris Murray (CC BY-ND 2.0) Riders travel through the mansion on pod-like cars that direct the vision of passengers toward its many illusions.

The system was a natural fit for the Haunted Mansion, largely because of the pod-like shape of the cars. The vehicles, which ride designers began calling “doombuggies,” naturally direct the vision of passengers to what’s in front of them. Because it’s impossible to see what’s behind the car, lights and staging areas could be hidden from sight.

The Omnimover is also a people-carrying powerhouse. Every hour, the Haunted Mansion can accommodate more than 2,500 riders. That’s nearly 1,000 more than Disneyland’s newest attraction, Millenium Falcon: Smuggler’s Run can carry.

Its high capacity is one reason the Haunted Mansion has made it to 50 years; because it can handle so many riders, lines are generally tolerable even at the park’s most crowded times.

But the ride’s popularity is also clearly linked to its signature blend of spooky and silly spectacles—carried off through a mix of high-tech and old-fashioned methods.

Another innovation imagineers cooked up for the 1964 World’s Fair was audio-animatronic technology, which synchronizes the movement of robotic models to sound effects or a musical score. The technique allowed the Haunted Mansion’s “Grim Grinning Ghosts” to move in synch with the ride’s music, and to pop out in time to be seen by passing riders.

But the attraction’s most memorable effects are created through the 19th century tricks of light that enchanted the mansion’s designers early on in its creation. The ghoulish apparitions in the mansion’s ballroom, as well as the hitchhiking ghosts that appear alongside riders at the end of the ride are accomplished through use of the Pepper’s Ghost technique.

Put simply, models hidden offstage are bathed in light, which bounces off reflective glass, creating a projection of the figures visible to riders.

The ride’s success not only helped to cement Disneyland’s status as Southern California’s premiere tourist attraction—it paved the way for the sophisticated haunted houses that pop up throughout the nation every Halloween.

As Smithsonian pointed out in 2015, the haunted house has a long history dating back to at least the early 20th century. But the success of the Haunted Mansion inspired countless imitators and ushered in an entire industry dedicated to the creation of spooky attractions.

Fifty years later, it remains the most refreshingly macabre offering you’ll find at the Happiest Place on Earth.